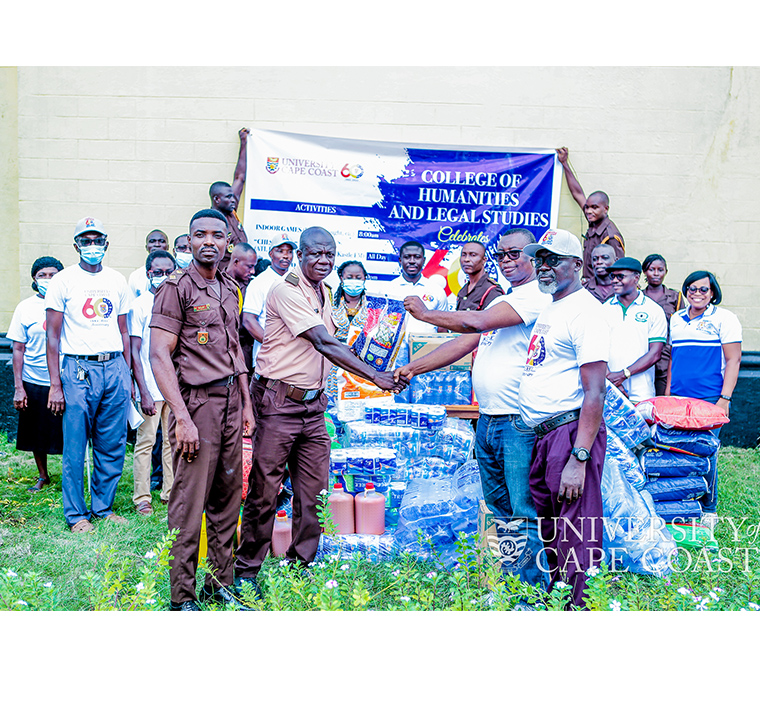 The College of Humanities and Legal Studies (CHLS) of University of Cape Coast (UCC) has made a donation to the Communicable Disease Prison (CDP), Ankaful in Cape Coast.

The gesture formed part of scheduled activities commemorating the sixtieth (60th) anniversary celebration of the University.

Items donated to the inmates included toiletries, bags of rice, gari, beans and oranges. There were also gallons of vegetable and red cooking oil, boxes of spaghetti as well as bags of water.

The Provost of the College, Prof. Eric Francis Amuquandoh, in his remarks said the University was concerned with the wellbeing of the inmates hence, the gesture. He noted that the soaring number of inmates being recorded in prisons across the country was telling of society’s failure to holistically nurture these individuals.

He added that the College’s generosity to the incarcerated at the facility was to show them love, encourage them to reform and when released back into the larger society, contribute their part towards national development.

Receiving the items on behalf of the inmates, Superintendent Samuel Addai, the Second in Command at the facility was grateful for the support. He appealed for more reliefs in the form of food and medication.

During an interactive session with the inmates, the Dean of the Faculty of Law-UCC, Prof. Philip Ebow Bondzie Simpson, drawing inspiration from the Bible noted that love was the fulcrum of human existence hence, the donation. He also counselled the inmates to allow themselves to be reformed.

Inmates of the Communicable Disease Prison Ankaful are calling for the swift re-implementation of the literacy programme for prisoners. Non-formal education for inmates began at Ankaful in 2007, with the training of facilitators and materials provided by the Non-Formal Education Division of the Ministry of Education. As a further step, there was a Special Initiative on Distance Learning (PSI-DL) in English Language, Mathematics, Science, Block Laying, and Concreting in April, 2008.

According to the inmates, the programme had stalled and they were appealing for its re-implementation. The Officer-In-Charge of the CDP, Chief Superintendent Roger Azanya, responding to this told the UCC delegation that the Non-Formal Education Division of the Ministry of Education had been to the facility to identify individuals who qualify for the programme. They were,however, still in waiting to see the programme started.

Another concern raised by the convicts was the challenge of re-integration into society after serving time. They noted that the discrimination they suffer when released pushed many of them back into criminal acts in a bid to return to prisons where they feel welcome. They called for extensive public education for their acceptance into society. One inmate made particular mention of the ill treatments they suffer at the hands of health professionals when they were sent to health facilities for treatment. He said a change in such behaviour will enhance their reformation.

Another inmate, reiterating the appeal for medication, said the meager amount they received from government as feeding allowance was woefully sufficient to support their medication. Currently, each inmate receives GHS 1.80p daily.

Present at the donation were the Dean of the Faculty of Arts, Prof. Kwame Osei Kwarteng; Dean of Faculty of Social Sciences, Prof. Akwasi Kumi Kyeremeh and the Ghana and China Directors of the Confucius Institute, Prof. Ishmael Mensah and Prof. Ou Yamei, respectively. The College Registrar, Mr. Ebenezer Aggrey, as well as other faculty members and staff graced the event.

Established in 1948, the Communicable Disease Prison (CDP), Ankaful which currently houses some sixty-four inmates was built to hold prisoners suffering Tuberculosis and other communicable diseases. This is mainly to prevent the spread of infectious diseases amongst the general prison population in Ghana.